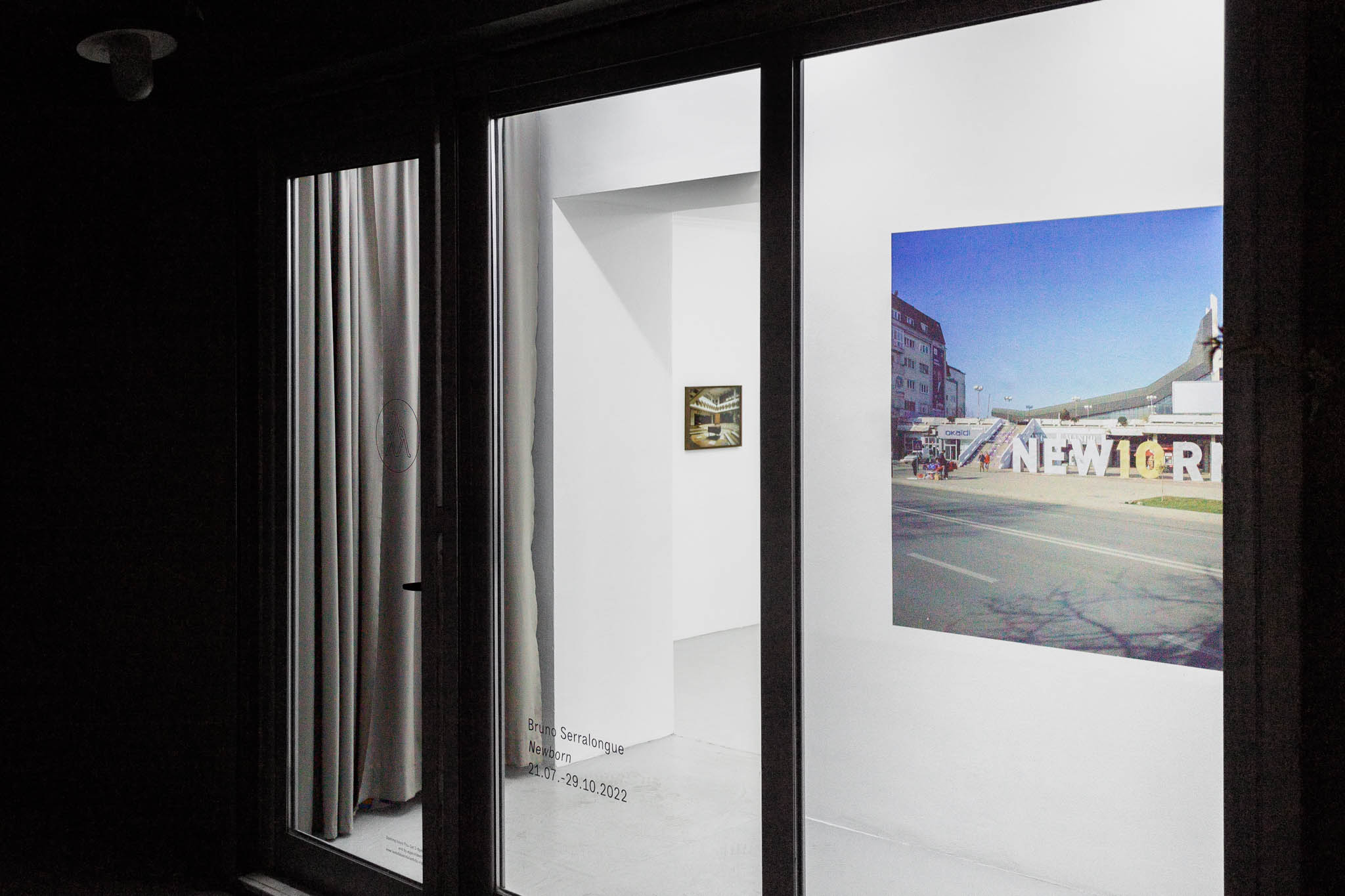 17th February is the anniversary of independence for Kosovo. The declaration of independence was adopted on 17 February 2008 by the Assembly of Kosovo. It was the second declaration of independence by Kosovo's Albanian-majority political institutions; the first was proclaimed on 7 September 1990. In a meeting attended by 109 of the total 120 members, the assembly unanimously declared Kosovo to be independent from Serbia. All eleven representatives of the Serb minority boycotted the proceedings. The independence came at a huge cost for Kosovars, 13,500 deaths or people missing, displacement of between 1.2 million to 1.45 people alongside severe maltreatments.

Bruno Serralongue arrived to Prishtina in 2009 for the first anniversary of independence with such information-based sentences of press coverage and similar images framing the theatre of atrocities and mass sufferings from the position of Western media. Those who consumed such images of war from far rarely understood where Kosovo is in Europe, who its communities are, which languages they speak. A fact of ignorance that has changed very little in the last 14 years as Kosovars -while suffering from inconsistent governance and corruption- kept struggling with the crisis of status quo and gradually lost trust and confidence in the policy making power of international agencies. Yet hope has been always somewhere on their horizon.

From 2009 on Serralongue dedicatedly visited Kosovo in different intervals. He takes his time as he did and continues to do in different parts of France and the world marked by crucial struggles of ‘human condition’ forming a personal map of world’s ethical psycho-geography in passage and resistance. Following the thoughts of Hannah Arendt and Sylvia Wynter in Potential History: Unlearning Imperialism (2019), Ariella Aïsha Azoulay reads the human condition consisting of a diversity of political species and necessary diverse worlds that is at the same the object of imperialism’s assaults and the bedrock of resistance to imperialism. Serralongue looks for that untranslatable which takes place in the nature of documenting that human condition. Something in photojournalism always misses the energy of a gathering, movement or meeting while making the visual information of spectacle. In Serralongue’s takes moving in-between the aesthetics of artistic photography and photojournalism, the fact of what’s missing becomes an enigmatic protagonist of the image.

A colloquial political subject-hood that demands restorative justice in various forms of collectivities is Serralongue’s core interest; may it be in Calais, North Dakota, South Sudan, Mexico, New Delhi or Notre-Dame-des-Landes. Moments, situations, landscapes, assemblies and people in Prishtina, Mitrovica and Peja are recorded with his photographic chamber making a new series that is always building up on the energy of the previous series. His is an unspectacular presence that accumulates in time and acquires new meanings in that precise temporal accumulation. Aware of the loaded agency of his chosen medium in writing history for various constructions of power and hegemony, Serralongue takes a position in creating an artistic document of the moment he witnesses which is about to become past with his camera’s shutter movement. The past or pastness is a position; the past doesn’t exist independently from the present. The way Serralounge works is a conscious slowing down of the image creation process in an age of absolute information economy may also be understood to address this pastness as a position.

In her very last essay Regarding the Pain of Others (2003) written in the aftermath of the war in Yugoslavia and the Kosovo War, Susan Sontag paraphrases from several sages ‘Nobody can think and hit at the same time,’ while she addresses the importance of standing back and thinking confronted with images of human atrocities. The gesture of standing back to think is very present in Serralongue’s 1998-1999, Musée du Kosovo, Pristina, septembre 2009 (2009), it is a photojournalistic image document of the mass movement most probably towards refugee camps in the Macedonian border, taken from an angle to address its museal presentation In Kosovo Museum. Hinting at the massive Kosovar diaspora in formation, the photograph very much reflects Serralongue’s interest in the epistemology of the press image and appropriating its certain codes in his translation to the artistic that started with his early work Faits Divers (1994-95) where he created photographic work on the press presentation of some local event. The distance he takes in 1998-1999, Musée du Kosovo, Pristina, septembre 2009 (2009) is very present and almost as important as the image in the center. He questions the illusion of consensus that takes place looking at the images of the victims of human atrocities.

Rather than the question of independence, Bruno Serralongue is more interested in the fact that Kosovo has come into existence as a new country in Europe. He desires to envisage what this means at a time when questions of identity and immigration are constantly in the headlines. That direct question connects his Kosovo series especially to Calais (2006-2020) and Lesbos. Kosovo, ensemble 1 (2009) frames the celebrations of the first anniversary looking at the NEWBORN monument most likely from the staircases going onto the Palace of Youth and Sports. We see that NEWBORN has already lots of small graffiti on it, the city center looks alight and ghostly at the same time. There are fireworks flashing in the sky from Mother Teresa Boulevard. It is difficult to understand how much the artist feels implicated in the celebratory moment. Yet he builds a relation with the situation step-by-step. The silence of such a celebratory moment reminds Michel Rolph-Trouillot’s analysis that any historical narrative is a bundle of silences and the result of a unique process in his famous Silencing the Past: Power and the Production of History (1995). For the 10th anniversary nine years later, in the large format TBD (2018), the OR letters are replaced by number 10. This time we see the monument in daylight shot across the street. The mood looks more normalised in contrast with the fireworks in the night sky. Many Kosovars have kept trying to leave Kosovo and to dream another life in other parts of Europe in the meantime. Silence continues on another frequency.

May photography appear as a site of worldliness that shows our implicatedness today? That is one of the questions Serralongue follows as he dedicatedly appeared in Place de Châtelet in 2001 to follow the Manifestation du Collectif de Sans Papiers de la Maison des Ensembles, taking one photograph at each demo. He prefers to work on and from the borders while breaking into the porosity that dominated the photography as the photo reporting images shot for press are taken as artistic works and therefore the hegemonic role the photo-reporter took in the domain of photography. Back in 2003, Sontag says a photograph is not supposed to repair our ignorance about the history and causes of the suffering it picks out and frames, it can only be an invitation to pay attention, to reflect, to learn, to examine the rationalizations for mass suffering offered by established powers. Today in the total omnipresence of images, when drones are used as the image makers of the new wars, there is a different visual literacy that needs to be at work. Serralongue’s search for the untranslatable of the human condition in the photographic realm (with his oblique perspective from the sideways) proposes itself to be one of the tools for building this literacy alongside other artworks that discuss the nature of the representation overload in our world that becomes more barbarian every day.

Seeing a selection of Serralongue’s Kosovo series for the first time in Kosovo in 2022 summer at LambdaLambdaLambda in the heart of Prishtina resonates a lot with the long-fought change that arrived in parliament by Kosovo’s still fresh Prime Minister Albin Kurti accompanied by president Vjosa Osmani. On the other side, it also resonates with rightful concerns and anxieties triggered by the new climate and regime of war taking place in Ukraine on the eastern borders of Europe; the questions that arrive with the new wave of refugees. Serralongue shows we continue to live in a grand picture that is radically incomplete. And rather than waiting for the grand picture to be completed and downloaded, we need to train new sensitivities and new muscles to world the worlds otherwise for the futures we want to enact.