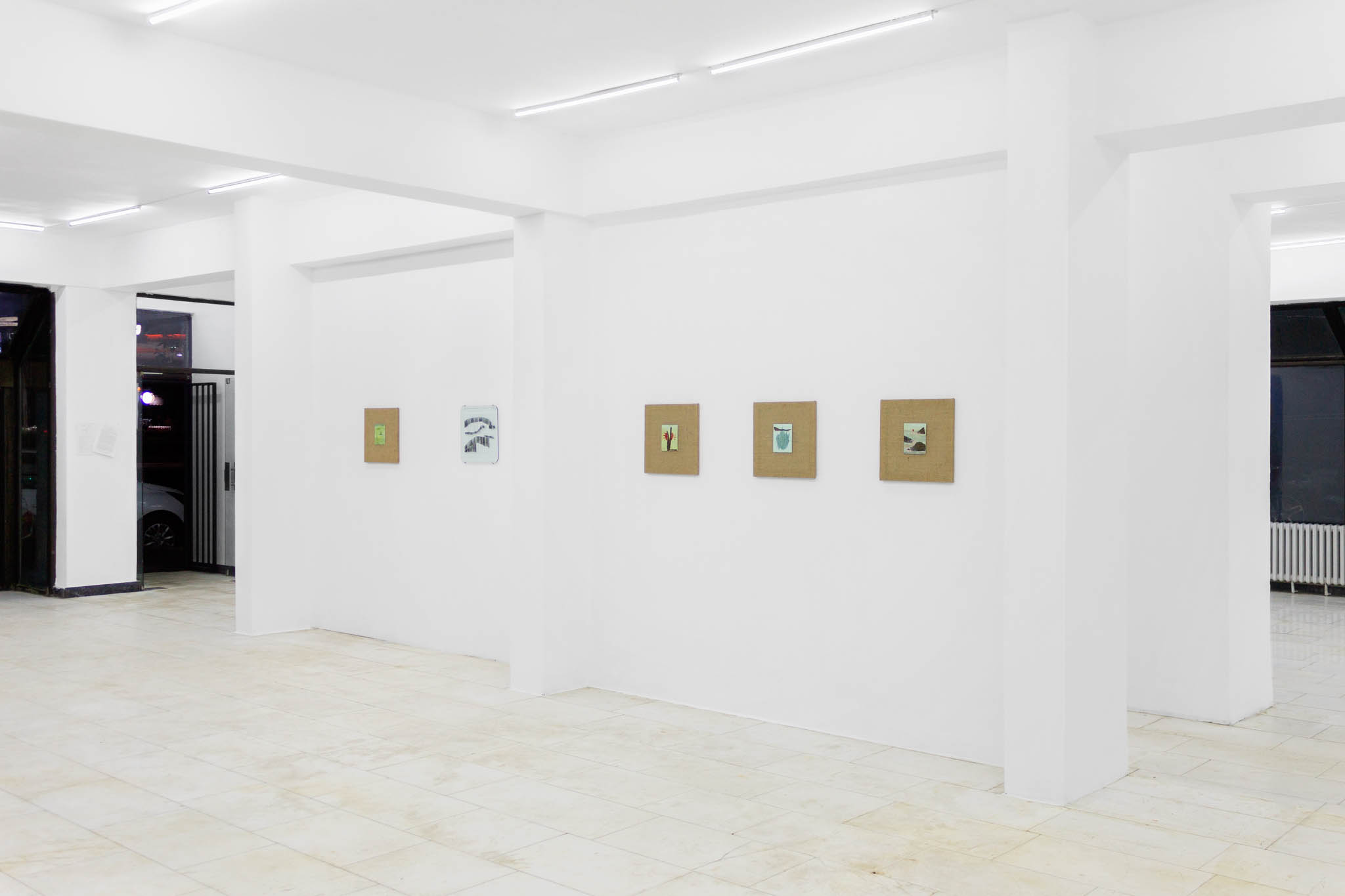 Nothing Like Home II (at LambdaLambdaLambda²) presents works by three artists from Kosovo. Even though their respective artistic approaches are different and the media in which they work vary, they share one point: the reflection of how it is to live in Kosovo today. In their works, personal experiences are embedded in larger social contexts and mirror the country’s psychological state of mind.

Blerta Hashani’s paintings are informed by classical landscape painting, but what they show are private views of the nature surrounding the artist’s home in the countryside. These small-scale works — paintings attached to jute — are experimental, minimalistic sketches based on a few brushstrokes, a sketched line or a layering of translucent paint. Modulated from basic elements, fundamental aspects of landscape become visible: volumes and contours, atmospheres, degrees of luminosity, of lightness, and solidity. Horizon lines turn into coordinates that provide orientation and yet leave much to imagination. These works create a parallel reality to the world as perceived by the artist. The canvas becomes a visualisation of her memory, where the experienced takes shape; a place for impressions of an ambient that remains subjective despite its generalisation. Sometimes a face shimmers through fields of colour or disappears in the dark. Hashani is interested in the emotion behind the visible, the breath that emanates from everything that surrounds us. Some of her canvases seem to pulsate with colour, even though time stands still in each of these captured moments. These paintings are as much about the place where Hashani lives as about herself and her being in the world. She is the mirror that reflects the information she gathers, the sensations she feels, and the transformations she experiences. Translating all this into lines and fields of colours, the artist enters the image, presenting her own outer and inner view.

Brilant Milazimi’s works, in contrast, present a more surreal, darker view of living in Kosovo. There are a lot of teeth in his latest paintings – teeth pressed together or surreal creatures with tooth-like tentacles almost caricatures of the bright American Smile, the teeth Brilant Milazimi’s works are both weapon and camouflage: signifiers of that which is usually well hidden behind polite, often fake smiles. But we should not be mistaken by these expressive figures and faces. Brilant Milazimi’s works are neither allegorical nor anecdotal. They are visually powerful articulations of that which is oppressed; of trauma and what it means to live in Kosovo today. A realism full of with dream-like fragments of memory resonates from these canvases, and the fake smile is but a symptom of an everyday life where social interaction is easily overshadowed by deeper lying tensions. These paintings drawing on personal and collective memory offer an intuitive analysis of a contemporary condition of struggle and negotiation, of balancing feelings, of hope and freedom as well as coping with reality. Brilant Milazimi translates his perception of the world into images that are bitter, funny, tender, and weird all at the same time. Driven by the machinery of the unconscious, and inspired by the imaginaries of fictional universes, he finds expressions both sinister and poetical for an approach to the society he lives in: the exaggerated physiognomies and the highlighted symbolism of the teeth are visual manifestations that trigger memories as much as they point to the present and its conflicts.

In Dardan Zhegrova’s works the power of poetic language enters stage. Taking self-written texts as a conceptual framework, the artist employs the sensuous dimension of language and its potential to explore complex psychological settings. He unfolds a language of longing and desire that articulates in sculptures and a rich body of poetry both written and performed. Stemming from lived experience as well as imaginary spaces, Zhegrova develops a sort of artistic autofiction that reflects the shaping of the “I” through the intimate encounter with the other. Avoiding any pronouns, his narratives travel between the I and the You. In his latest works, short poetic sketches in casual English, often just a sentence long, are written on sheets of various types of glass. The transparent material adds a spatial layer to the words and creates a floating narrative that blends with its surrounding. The words on glass cast their shadows on us, the visitors, and involve us in the poetic dialogues with the unknown, desired, partly real, partly fictional other, themself an embodiment of a fluid queer identity. The silver doll, part of Zhegrova’s ongoing series of works called “Your enthusiasm to tell a story ”, resembles a human character and carries a sound device hidden inside its bodies. It recites a piece of poetry, which in turn becomes an essential part of its identity. Both speaker and listener, source and recipient of the words, the doll's abstract soliloquy allows no distinguishing between the self and the other. The doll thus exemplifies the central motive of Dardan Zhegrova’s work: the constitution of a real-imagined self by means of a fiction that is able to allow desire and liquify borders still present in the real world.