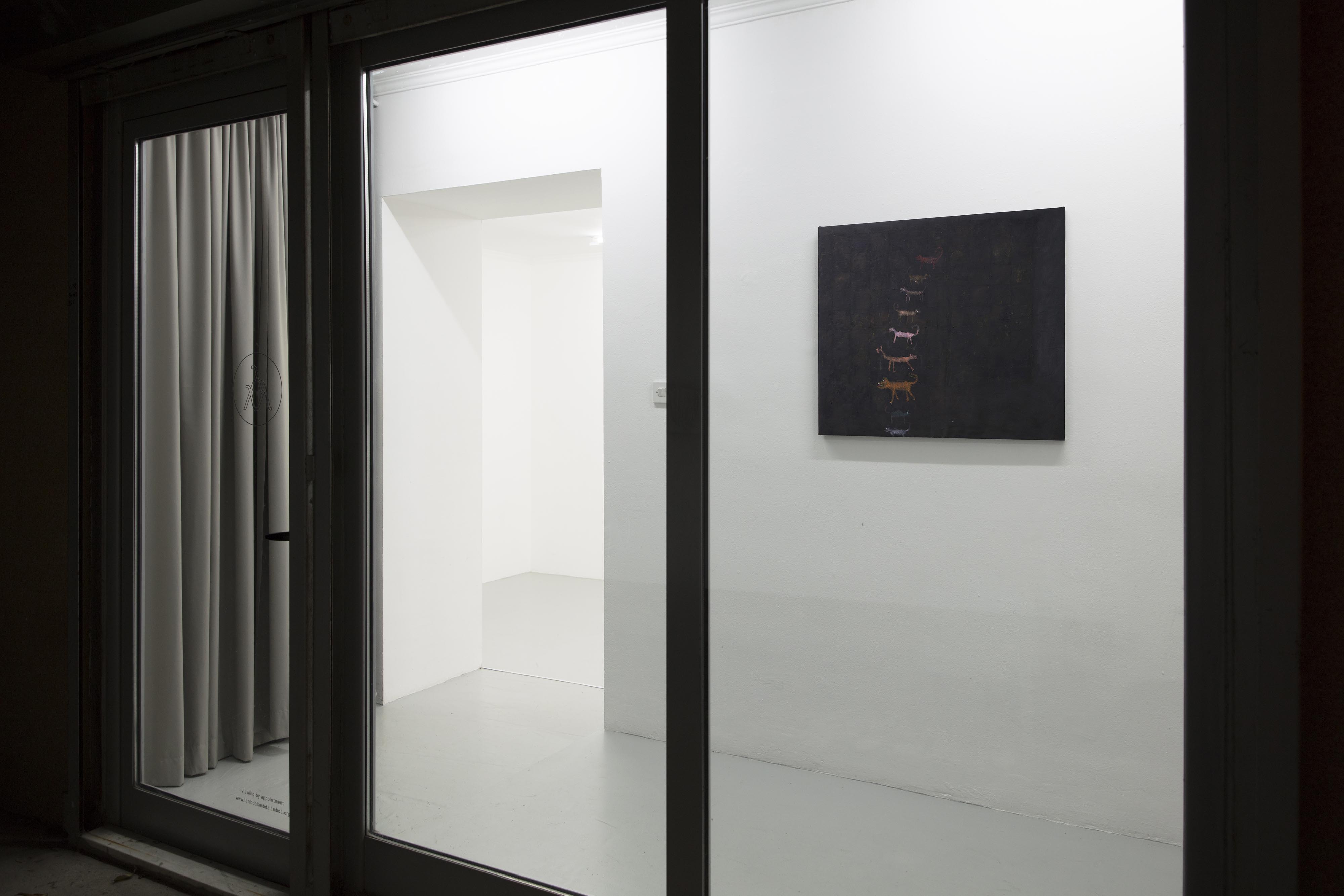 When I was asked to write the press release for Brilant Milazimi’s exhibition, his first with LambdaLambdaLambda, I had just started watching The X-Files, a science fiction television series from the 1990s. Over the course of the show the believer-versus-skeptic dynamic is played out in fantastic scenarios often involving aliens. I mention this because on first seeing Milazimi’s paintings I was reminded of how extraterrestrials are often portrayed in films and television: with long, gaunt arms and legs, and hollow-looking faces. Indeed, many of Milazimi’s figures look as if they have stepped out of some distant universe onto the canvas. Touch the Snow (2019), for example, shows two figures with long, spindly arms and legs set in the foreground of the composition, as if walking toward the viewer. The larger one looks to be an adult and is done red and pinkish hued oil paint, while the smaller, childlike figure has a bright yellow face and similarly pinkish body. Both the figures have their left hand raised, as if greeting someone. This is not to say that these beings don’t look human: they have roughly humanlike noses, eyes, and ears after all. And as for their mouths, the smaller figure seems to have a smile; while the taller figure has a wide series of white marks for a long smile. Layered one over the other, like rows of teeth, this motif recurs through many of Milazimi’s paintings. They draw our attention to the figure’s humanness, or at least human likeness, but they also create dissonance because they look slightly sinister and eerie in appearance. But it’s not just the figures in Mialzimi’s works that create this sense of the familiar yet foreign; it’s also the general atmosphere they conjure. Returning to Touch the Snow, the painting’s background has been done in hazy shades of brown and blue with white, blurring any sense of clarity of shape, while two round orbs behind the figures look like two moons from a distant planet. There is something recognizable to this landscape, but also something alien.

There are of course other motifs in Milazimi’s paintings, such as the dogs in Houseless Dogs (2019). But in all of his works we find the haziness of memory: images that do not have enough detail to fully define them, yet are somehow known to us. This gives eeriness to Milazimi’s paintings in the sense that they evince either something that is missing (like a fully formed human smile) or something that shouldn’t be (like rows of teeth extending beyond where they normally would). Perhaps this is due to the young Kosovoar’s images being influenced by his own memory and everyday life, where not everything is transparent. The aesthetic affect of this is to draw attention to the potential agency of the beings in Milazimi’s paintings—they are just familiar enough for to us to wonder about their narrative. And as Mark Fisher has noted, “the eerie turns crucially on the problem of agency.” And therein lies the importance of being alien or eerie: we want to believe we are not alone in the unthinkably big universe, and Milazimi’s paintings remind us of this.