The hole and the mirror 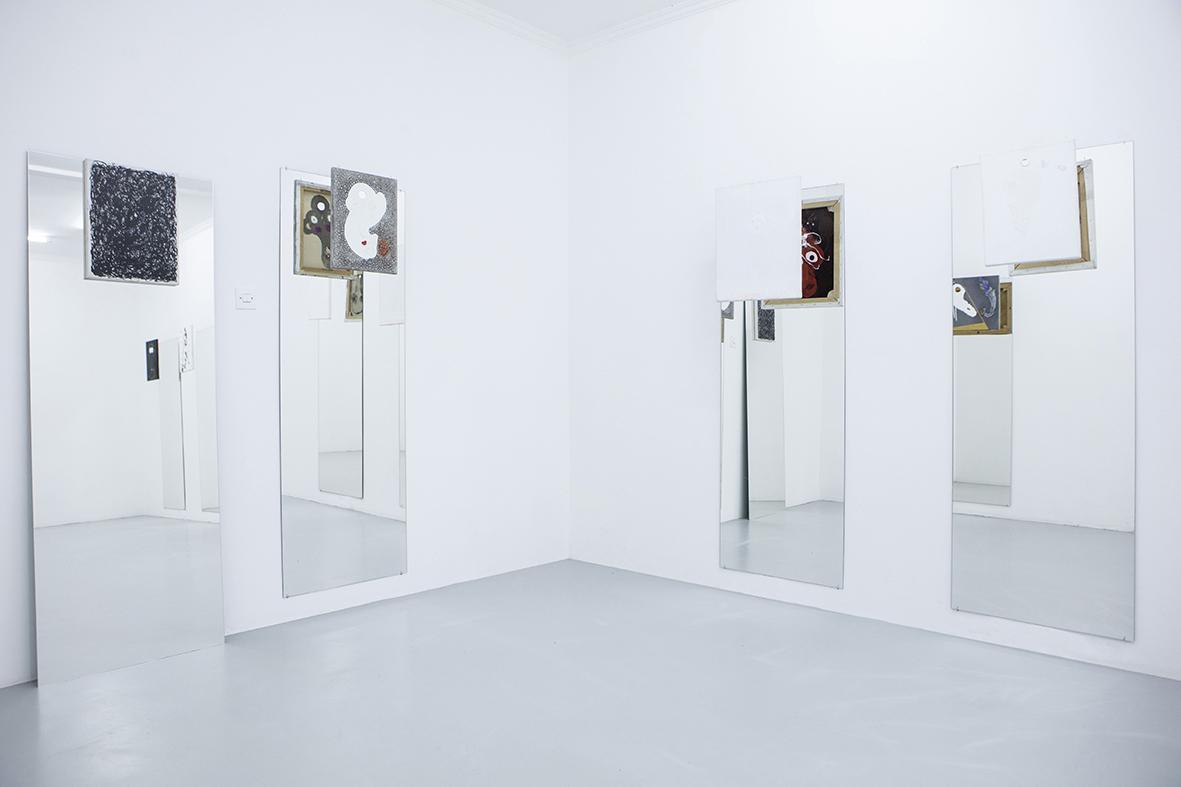 Exhibition view, The hole and the mirror, Heinz Frank

At the core of Merleau-Ponty’s philosophy was the goal of eliminating the dualism between body and soul that existed in the philosophy of the early 20th century, i.e. the problem of the relationship of consciousness to its expression. In Eye and Mind (L’Œil et l’esprit, 1961) Merleau-Ponty uses the mirror as a model in his description of the relationship between seeing and art. His basic assumption is that the body is "a network of seeing and movement". This body is part of the world just as the world is made of "the very material of the body". Merleau-Ponty thinks the relationship between body and world as follows: "My moving body belongs to the visible world, is a part of it, and therefore I can align it in the visible. Conversely, vision however also depends on movement. You only see what you look at." He thinks seeing very physically and tactilely, stating that "seeing nothing is other than getting hold of it at a distance". This seeing is "a reflection or a concentration of the universe” and this “reflection of things indicates the labor of seeing".

“As a sign, the mirror in the open periphery of the seeing body (corps voyant) has become the visible body (corps visible). Every technique is a >technique of the body<. It embodies and extends the metaphysical structure of our body (chair). The mirror appears because I am a seeing visible: because there is a reflexivity of the sensual that it reflects and doubled. By it my appearance is completed [...].”(1)

Heinz Frank did not think of the world of external to him. On the contrary, his practice resided “in the in-between space between the void inside and the outward inside”, as the late artist put it. A dichotomy between inside and outside— internal and external worlds didn’t exist in Frank’s thinking nor does it exist in his works. Everything is circular and interlaced. “Felt thinking and thought feeling”. He created his self-portraits accordingly. Most often these portraits are painted on both sides with each of them carrying a perforation, i.e. a hole on their surface. One would need to choose to either see the “outside”/visible or the “inside”/invisible of the canvas, or to look right through the canvas via its hole to not see neither (visible nor invisible) in order to see what lays beyond it- another invisible. The hole is the key protagonist in Frank’s thinking. Through the hole we are kept in an eternal loop- we are neither here nor there.

The mirror succeeds in embodying the structure of our body and to complete our appearance. This completion through the mirrors can only be experienced because we are both seeing and visible. Heinz Frank’s self-portraits are both visible and invisible.
The mirror makes this explicit.

Heinz Frank (1939-2020) studied architecture at the Academy of Fine Arts in Vienna and has been working as an artist since the 1960s.  Frank recently had solo-exhibitions at Badischer Kunstverein, Karlsruhe (2019); Kunsthalle Wien, Vienna (2019) and Bureau des Réalités, Brussels (2018). His works have been included in numerous group-exhibitions, most recently at LA MAISON DE RENDEZ-VOUS, Brussels (2020); Riga Biennale, Riga (2020); Museum der Moderne, Salzburg (2019); Centre Pompidou, Paris (2019); Tanya Leighton, Berlin (2019) and Landesgalerie Linz (2018).
His works are part of several public collections, including mumok - museum of modern art Vienna; MAK - Museum of Applied Arts, Vienna; Rupertinum, Salzburg and the Centre Pompidou, Paris, among others. The last sculpture that has been realised during Frank’s lifetime was part of the 2nd Riga International Biennial of Contemporary Art, RIBOCA2.