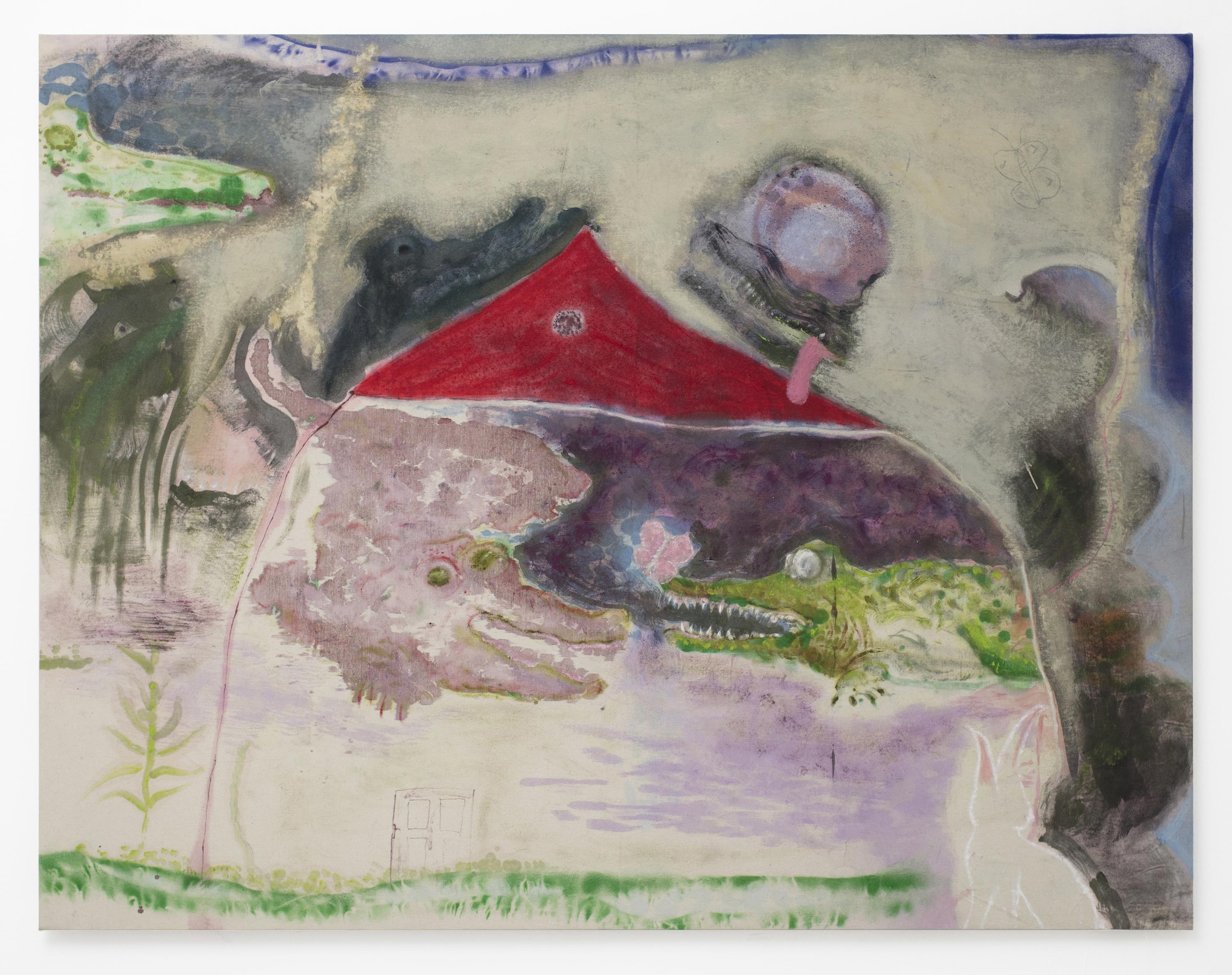 Stray dogs, crocodiles, and flowers populate Brilant Milazimi’s eerie paintings like the protagonists of a silent film. If there is “nothing like home,” as we are told by the painting this exhibition is named after; where is “nothing?” Like any old adage, we hear this without listening, and could almost forget that saying Nothing like home, is very different from saying that “there is no place” like it. In a country like Kosovo, the implications of this subtle difference are unequivocal.
The work of the six Kosovar artists presented in this exhibition is animated by a seemingly naive sensibility often paired with a kind of slapstick humor. Whether they are active members or close collaborators of the “Hap” collective, these artists intend to step in and open up the gates held by the older guard — the lazy crocodiles waiting by the river or in the National Gallery, where the collective organized a happening back in 2018.
Powered by the engine of a windshield wiper, Dardan Murseli’s stuffed and headless mannequin jumps around aimlessly to the pathetic rhythm prescribed by a rudimentary bricolage. In the meantime, a robotic hand devised by Valdrin Thaqi counts tasbih beads in an endless prayer. Such nonsensical occurrences are epitomized by the automatic writing of Blerta Hashani, whose small drawings contain even smaller microscript-like notations.
Time and again, the derelict and routinely undecipherable nature of things in Kosovo emerges out of Milazimi’s mountainous landscapes drenched in moonlight, or from Arbnor Karaliti's earth toned depictions of childhood memories. Blatantly unaware of Ermir Zhinipotoku’s cat silhouettes, the birds in Karaliti’s painting remain potential prays. Throughout the exhibition, these metaphorical power relations exert a grotesque yet serious undertone. Despite their young age, these six artists have understood that home is not “just a feeling.” Home is a place — the one where you grow up wanting to leave, but also the one you hope to see evolve into your own visions.

∗ Brilant Milazimi, Dardan Murseli, Valdrin Thaqi, and Ermir Zhinipotoku are the founders of the “Hap” collective. Established during their time in art school in 2018, “Hap” translates as “to step” or “to open”. The collective was formed as a way to organize and react to events in Kosovo through exhibitions and happenings.